Ferrets can suffer from tumors in any part of their body, ranging from benign cancers of the skin to aggressive malignant tumors of internal organs. A large number of ferrets are affected by tumors of the lymphatic system and the pancreas. See the handout “Skin Diseases in Ferrets” for more information about tumors affecting the skin. 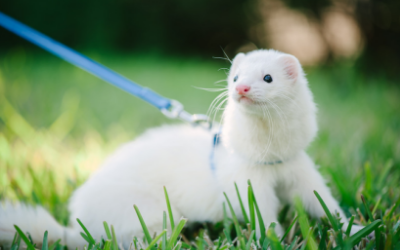 Lymphomas are tumors of the lymphoid (immune) system and can affect all ages of ferrets (the most common age range is 2 - 9 years).

"Malignant lymphoma (lymphosarcoma) and leukemia are the most common malignancies seen in ferrets."

Malignant lymphoma (lymphosarcoma) and leukemia are among the most common malignancies seen in ferrets. Lymphoma can affect the lymph nodes, liver, spleen, respiratory system, bone marrow, gastrointestinal tract, eyes, skin, nervous system, heart, and kidneys. When lymphoma is in the bone marrow, it is referred to as leukemia. The clinical signs depend on the type of tumor, organ involved, and the stage of the disease. Ferrets also may be asymptomatic for years. Younger ferrets typically develop large tumors in the chest that can spread into the bloodstream and often become ill very quickly. Older ferrets more commonly develop lesions in organs, such as the liver and intestines, and can go weeks to months without showing signs of illness.

How is lymphoma diagnosed?

Diagnosing lymphoma can be difficult as there is a diversity in signs that a ferret may have including lack of appetite (anorexia), lethargy, weight loss, weakness, vomiting, diarrhea, blood in the feces, abdominal distention, bulges or visible masses, problems breathing, coughing, and hind limb weakness may occur. Your veterinarian may be able to feel masses. A blood sample with a high number of lymphocytes, especially if the lymphocytes have certain specific characteristics of malignancy, may be confirm the diagnosis.

In adult ferrets, enlargement of lymph nodes is an important sign as is enlargement of the spleen, although the spleen can enlarge in perfectly healthy ferrets. Fine needle aspiration (FNA) or biopsy of an enlarged lymph node or suspected tumor may be recommended by your veterinarian. FNA involves taking a small needle with a syringe and suctioning a sample of cells directly from the tumor and placing them on a microscope slide. A veterinary pathologist then examines the slide under a microscope.

What is the treatment for lymphoma?

For a dedicated owner with a compliant patient, surgery and/or treatment with chemotherapy is an option. Adjunctive or supportive treatment with syringe feeding, antioxidants, and immune-stimulating supplements may improve the outcome. Remission of lymphoma is possible with treatment in ferrets, but recurrence is common, and complete cure is uncommon.

Tumors of the pancreas involving the beta cells, which produce insulin, are surprisingly common in ferrets. The tumor, called an insulinoma, may be an insulin-producing adenoma or an insulin-producing adenocarcinoma. By definition, an adenoma is benign, while an adenocarcinoma is malignant. Both benign and malignant insulinomas produce excess insulin and metastasize (spread) to other organs, including the liver. The average age for a ferret to develop an insulinoma is 5 years old, but it may be seen as early as 2 years of age.

"Tumors of the pancreas involving the beta cells, which produce insulin, are surprisingly common in ferrets."

Insulin reduces blood sugar (glucose); an increase in this hormone, as produced by an insulinoma, results in dangerously low levels of glucose in the blood. The brain relies on glucose to function, therefore low glucose levels affect the nervous system.

Clinical signs of hypoglycemia (low blood sugar) result, including pawing at the mouth, ’stargazing’, weakness (often seen in the hind end), tremors, collapse, abnormal behavior, weight loss, depression, lethargy, and confusion. The symptoms can progress to include seizures, coma, and death. The adrenal gland may react to abrupt reductions in blood glucose by producing adrenaline; increased levels of adrenaline cause a rapid heart rate, tremors, and irritability. On the other hand, some ferrets with tumors of the pancreas early on show no obvious clinical signs or may show only intermittent signs; a ferret that has only intermittent episodes of hypoglycemia may go undetected because these symptoms are not always witnessed.

How is an insulinoma diagnosed?

A measurement of the blood insulin level would seem to be the obvious test, but sometimes ferrets with insulinomas have normal insulin levels at the time of sampling. The ratio of insulin to glucose is a more useful test. If there is a high level of insulin despite a low glucose level, the diagnosis is definitively made. Often, a diagnosis is made based upon clinical signs and absence of other abnormalities, beside low blood sugar, on the physical examination or blood testing.

How is insulinoma treated?

Treatment of insulinoma may be medical or surgical, depending on the severity of the disease and on the age of the ferret. Recent studies have shown that surgery may not extend survival time over medical treatment; therefore, many veterinarians recommend medical therapy over surgery. Medical therapy involves use of a corticosteroid, like prednisone, to increase glucose production by the liver, and/or an anti-insulin drug, such as diazoxide, to help increase blood glucose levels. These medicines do not stop the progression of the tumor but will minimize the clinical signs by keeping the blood sugar from declining. Ferrets treated with medication will need to be monitored carefully, as their tumors continue to grow, and their medication dosages typically need to be increased accordingly. Surgery involves removing any visible pancreatic tumor nodules. While it is easy to remove visible insulinoma nodules in the pancreas, the tumor often remains microscopically in the pancreas and liver, so surgery is not always curative, and disease recurrence is common.

"Recent studies have shown that surgery may not extend survival time over medical treatment; therefore, many veterinarians recommend medical therapy over surgery."

Diet must also be managed. Ferrets tend to be ’grazers’ or nibblers when they eat. Therefore, it is preferable to provide numerous small meals daily to provide a more consistent food intake, which helps level out the blood glucose levels. Sugary foods, such as fruit and molasses-containing treats, must be avoided, as they cause rapid swings in blood sugar and accompanying surges in insulin. Most veterinarians recommend ferrets with insulinoma eat a high-protein, moderate-fat, low-carbohydrate, commercially available ferret food.

If a ferret experiences a sudden collapse or a hypoglycemic coma, emergency treatment is critical for its survival. Immediately rub honey, Karo syrup, maple syrup, or corn syrup onto the gums (be careful if the ferret is experiencing a seizure, as there is a danger of being bitten.) The ferret will absorb a small amount of sugar through the gums to help stop the seizure. Then, rush your ferret to the veterinarian, who will administer an intravenous sugar solution to treat the other symptoms of hypoglycemia until the seizure stops, and the ferret can swallow. The animal must be started on oral medication to raise its blood sugar as soon as it is awake and stable. A ferret undergoing continuous seizures from hypoglycemia will likely suffer brain damage and death if not treated.

What is the prognosis? 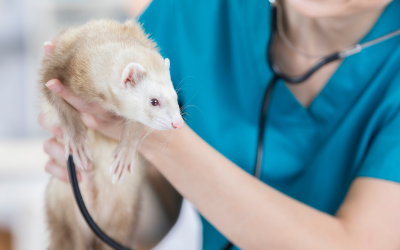 In the largest reported series of cases to date, surgical removal of insulinoma in ferrets demonstrated a mean survival time after surgery of around 500 days, which is relatively long, given that affected ferrets are generally middle-aged. However, studies have shown that ferrets with insulinoma also respond well to medical treatment with blood glucose-raising drugs, and since many ferrets already have metastasis of the tumor to the liver at the time they are diagnosed, many veterinarians proceed with medical therapy rather than surgery. Many ferrets respond well to medical therapy, and depending upon the severity of the disease, they can live for several months up to several years.

© Copyright 2019 LifeLearn Inc. Used and/or modified with permission under license.